In President Donald Trump’s most recent Chinese Coronavirus press briefing, he not only highlighted key examples of how his Administration’s response to COVID-19 was swift and comprehensive, but also exposed the mainstream media’s consistent lies.

At a key moment in the briefing, the President played a nearly 4-minute clip that included examples of the mainstream media downplaying the threat of the Coronavirus, contrasted with his own quick actions such as the travel bans, as well as numerous governors, Democrats and Republicans, thanking him for his assistance to their various states.

The media was so enraged at their own hypocrisy being exposed that CNN changed their chyron four different times during the briefing to reflect such absurd statements as “Trump melts down” and “Trump turns briefing into propaganda session.” Several networks cut away from the briefing once they realized that President Trump was using their own words against them.

In doing so, not only were the media’s bias and lies exposed by President Trump, but, once again, they revealed themselves in how they responded to President Trump once more. 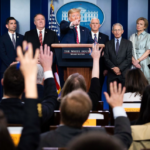