Yesterday, during a Fox News town hall live from the White House rose garden, President Trump made clear where he sees America in the next few weeks. It is his belief that the American economy should be reopened for business no later than Easter, which is on April 12th.

Although the Trump Administration is taking the threat of the Chinese Coronavirus seriously, the President is also making it clear that the cure must not be worse than the disease itself. As a former businessman, he understands that a lengthy shutdown of the economy could destroy even more lives than the virus ever, and is therefore unacceptable.

And Americans seemingly agree with President Trump’s decision. Shortly after he declared this Easter deadline, the stock market historically skyrocketed: With the DOW jumping over 2,100 points by the close of the day, the largest single-day point gain ever.

These recent developments serve as valuable reminders that the current situation cannot last forever. President Trump’s decision to get America back on track of is another sign of his strong America First leadership. 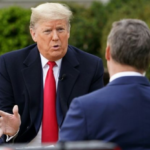