Over the weekend, President Trump fired yet another government bureaucrat to the ire of the FakeNews mainstream media. Upon the news that State Department Inspector General Steve Linick was fired on Friday, Democrats and the media baselessly accused President Trump of political retaliation with the firing.

However, the firing was actually on the recommendation of Secretary of State Mike Pompeo.

Linick, an Obama appointee, was the latest in a long line of inspectors general who has tried to start an “investigation” into the Trump Administration for the slightest perceived “wrongdoing,” another prime example of anti-Trump animus among Obama-era bureaucratic hold-overs.

Such executive branch officials are meant to serve the President, as chosen by the people through election. Their job is not to go rogue and “investigate” an administration because they disagree with its policies to who America chose to be Commander-in-Chief. When they begin thinking that this is their purpose, the President has every Constitutional right to fire such men and replace them, if at all, with men who will actually do their job rather than grandstand or political subvert a duly elected President.
AMERICA First is the newest nationally-syndicated radio show in the United States, part of the Salem Radio Network. The host, Sebastian Gorka PhD., served most recently as Deputy Assistant for Strategy to the President of the United States, Donald J. Trump, and is author of the New York Times bestselling book “Defeating Jihad.” His latest book is “Why We Fight: Defeating America’s Enemies – With No Apologies.” You can follow him on Twitter @SebGorka, on Facebook, and on Instagram @sebastian_gorka. AMERICA First is available on the iTunes podcast app, streams live at www.sebgorka.com, and is on YouTube. You can contact him here. 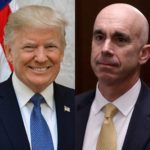