In his 10-minute address to the nation last night, President Donald Trump outlined the major actions that his administration is taking to protect Americans from the Wuhan / Coronavirus.

First, President Trump reaffirmed that America is still by far the best-equipped country in the world to deal with the virus, and that basic hygiene and common sense will go a long way to combat this threat.

That said, the President acknowledged the seriousness of the situation, and responded with sweeping measures to protect our country. These include a 30-day travel ban on all European countries, with the exception of the United Kingdom, and properly screened US citizens who are returning home. On top of the already-implemented travel ban on China, this move makes sense given that Europe is suffering from nearly 23,000 confirmed cases of the virus, with Italy being put on full lockdown due to its spread.

In addition, the President announced multiple economic measures to provide relief to Americans impacted by the consequences of the outbreak, including: the waiving by insurers of all co-payments for Coronavirus treatments; low interest loans for affected states and localities, to provide capital liquidity to impacted businesses; deferring tax payments, without penalty, for all affected Americans; and a payroll tax cut that President Trump will formally propose to Congress.

The Commander-in-Chief gave exactly the address that he needed to last night, displaying strong leadership and a continued commitment to an America First approach, which will defeating this threat, softening its impact on the American people, and revive our economy in the face of the Wuhan / Coronavirus hysteria peddled by his adversaries. 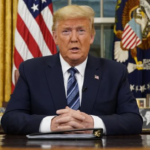