At the latest daily Coronavirus Task Force briefing yesterday, President Trump announced that, based on the latest projections that the spread of the Coronavirus has not yet reached its peak, the government is officially extending the CDC’s Chinese Coronavirus guidelines to April 30th.

With these projections in mind, President Trump advised that the “social distancing” measures and other such restrictions should remain in place in order to keep the American death toll as low as possible. President Trump also noted that the peak of the spread could come within the next two weeks, and that now the virus should ultimately be under control by June 1st.

Although the President had hoped to have the American economy full reopened by Easter, he is taking the necessary measures to stop the spread of the virus and save as many American lives as possible. It is a tough decision to take, but the kind of disciplined decision that can only be made by a Commander-in-Chief like Donald Trump. 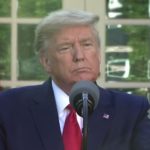