In a major development that has implications for the post-Coronavirus global dynamic, President Trump announced at his most recent daily Coronavirus press briefing that he will be halting all American funding for the World Health Organization.

As the President pointed out, the WHO has failed on numerous occasions, both before and during the Chinese Coronavirus outbreak. The WHO parroted the lie from the Chinese government that the Wuhan virus was not contagious back in January, which proved to be a fatal mistake. The WHO condemned and opposed President Trump’s travel ban on China, even though this proved to be a key measure that saved countless American lives. And since then, we have found our that the WHO has spent more money on its travel budget than on medical equipment.

The WHO has been exposed as a corrupt and incompetent organization. It has proven itself to be more in China’s pocket than anything else, which directly played a role in its failure to get out ahead of the Chinese Coronavirus pandemic. An investigation into their activities and connections to Beijing, as the President suggested, is the reasonable course of action when this is all over. 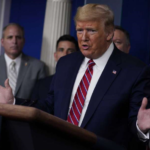