Sebastian spends the entire first hour with legal experts Joe DiGenova and Victoria Toensing to react to the ongoing second impeachment trial of President Donald J. Trump. Sebastian, Joe, and Victoria discuss the blatantly edited propaganda video that the Democrats’ impeachment managers played at the opening of their argument, which deliberately cut the key portions where President Trump explicitly called for “peaceful” protests, in a move reminiscent of the Soviet Union. They then explain how the impeachment is totally unconstitutional, and how the only high crimes committed in federal government as of late were during the Obama and Biden Administrations. 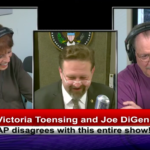 America First Update: Now we get to impeach Biden and Obama.