With the latest revelations about the Deep State plot against General Michael Flynn, and the Department of Justice’s subsequent decision to drop all charges against him, it is clearer more than ever before that high crimes were committed by the Obama Administration and that these crimes go all the way to the top.

Significantly, last night, the hashtag “#ObamaGate” trended high on Twitter, with over one million tweets on the subject. Despite Twitter’s efforts to suppress the hashtag, the sheer magnitude of how many people used the term last night is a sign m. It shows not only a widespread awareness of Obama Administration crimes, but the fact that, as even the mainstream media has been forced to admit, Obama was aware of Crossfire Hurricane, the illegal spy operation that targeted the Trump campaign and then Trump Administration.

The list of crimes committed by Obama and his coconspirators – including James Comey, John Brennan, James Clapper, Susan Rice, and others – is a long one. That is why today we are dedicating all three hours of AMERICA First to the scandal that is ObamaGate, the biggest political scandal in modern American history. Tune in today at 3 PM EST and get the full story, from special guests John Solomon, Sara Carter, Lee Smith, Daniel Hoffman, Judicial Watch’s Chris Farrell, and Congressman Matt Gaetz. 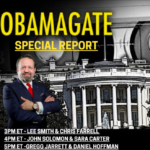 America First Update: Millions are Waking up to ObamaGate