The Fake News Industrial Complex has now essentially become an arm of the Chinese Communist Party when it comes to coverage of the Wuhan virus.

The relationship between the mainstream media and the Chinese regime has become a mutually reinforcing one. In some cases, outlets such as CNN are directly quoting press releases from the Chinese government when criticizing the American response to the virus and praising the Communist regime’s response. And the Chinese state-run media is directly quoting mainstream American media sources, especially any politically-motivated criticism of President Trump‘s referring to the disease as the “Chinese virus.”

Whatever their motivations may be – from attempting to harm President Trump’s re-election chances to trying to encourage a prolonging of the economic shutdown and strengthen the forces of “big government” – the mainstream media has made it clear that they are more than willing to side with a hostile foreign government rather than consider the interests of American citizens, and in doing so side with a Communist dictatorship. They truly are the Enemy of the American people. 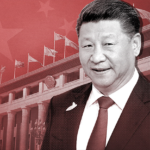