In the latest significant update of President Trump’s efforts to combat the Chinese Wuhan Coronavirus, it was announced yesterday that the first official vaccine for the coronavirus was put to the test Monday.

This trial comes months ahead of schedule. Dr. Anthony Fauci, in announcing the first test of the vaccine, admitted that it defied his original prediction of anywhere from several months to a whole year to develop such a vaccine, as this remarkable development comes just 65 days after the vaccine sequence was identified, which is a record.

While it still remains to be seen whether or not the vaccine will be a total success, the fact that one has already been produced so far ahead of schedule demonstrates the incredible advantages of President Trump’s approach to the Chinese Wuhan virus, emphasizing private sector response over more government bloat. President Trump has demonstrated that working with the free market rather than letting government bureaucracies lead the charge is the way to win. 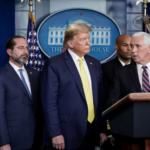