In the latest explosive revelation in General Michael Flynn’s legal battle, new documents have revealed that FBI agents explicitly plotted to get General Flynn fired from his position as National Security Adviser.

Among the thousands of documents that were deliberately withheld from General Flynn by his original defense team at the law firm Covington, there is a shocking handwritten note from the FBI’s then head is Counterintelligence asking whether to Bureau’s objective should be “to get him to lie so we can prosecute him or get him fired.”

Not only does this confirm the egregious malpractice of General Flynn’s original defense team, but it proves once and for all that there was, in fact, a Deep State operation aimed at forcing the General out of his position as National Security Advisor Ro President Trump and getting him sent to jail for political reasons.

This revelation also promises to completely upend the entire case, and may lead to the charges against General Flynn being dismissed. It could even mark a turning point in U.S. Attorney John Durham’s counter-investigation against those who started the “Russian collusion” hoax to begin with, an investigation that must include John Brennan, Jim Comey, and potentially Barack Obama as well. 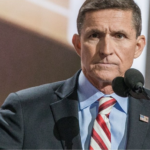