The Chinese Coronavirus curve is flattening and America is slowly getting back to work, but the Fake News media is even more emboldened in their blind hatred of President Trump and his accomplishments in keeping us safe.. Combined with their desire for 15 seconds of fame, they are prepared to do anything to try to embarrass the President and forge the history of his response to the COVID-19 threat.

Whether it’s Jon Karl falsely claiming that there was a shortage of testing kits, Brian Karem repeatedly interrupting the President and other reporters, Jim Acosta claiming that President Trump downplayed the crisis, CBS’s Weijia Jiang falsely lying that the travel ban did not save lives, and even a reporter lying about her company’s ties to the Chinese government, members of the Fake News Industrial Complex will blatantly distort the truth and lie about the President in order to achieve what they consider a political victory in their crusade against the President.

All this only further proves the President right when he called the FakeNews the “the enemy of the people.” For a devastating demonstration of all the lies they spread, just watch this latest Bill Maher interview with Congressman Dan Crenshaw. 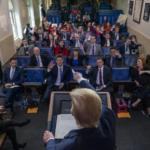