Most of the time that the media talks to a so-called “expert” on any modern crisis, chances are that said “expert” is hand-picked for the purpose of advancing the media’s narrative, even if it involves distorting reality. So when an expert actually calls out the media and pushes back against their narrative, you should pay attention.

Enter Dr. Drew Pinsky, otherwise known as “Dr. Drew,” the renowned physician with an extensive career in the media. In a recent interview with CBS, Dr. Drew was asked his opinion on the Coronavirus.

Without holding anything back, he took direct rhetorical aim at the mainstream media, who he said were directly responsible for a reckless hyping of the effects of the virus. He calmly pointed out how the Coronavirus, compared to other diseases such as the flu, or past “epidemics” like Swine Flu or Ebola, is not nearly as deadly as the media has made it out to be, with the public is being stirred into a frenzy over nothing.

When medical experts insist that this disease is nothing more than a less deadly version of the common flu, then it is time to stop listening to the hysterical pundits in the media who are trying to weaponize this virus against President Trump. Like Dr. Drew, we must keep calm and maintain common sense, without overreacting, when dealing with this virus. Only then will we be able to overcome it. 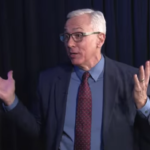