As Joe Biden solidifies his grasp on the Democratic presidential nomination, all of his past crimes and corruption will be exposed again for America, and all the world, to see. And nothing represents that corruption more than his son, Hunter Biden.

In addition to his personal life – from his being kicked out of the Navy for doing cocaine, to his affair with a stripper that produced a child out of wedlock – Hunter benefitted from his father’s position of power in a way that has come to represent the worst of Swamp corruption.

As is well-documented, Hunter received a high-paying position at the Ukrainian energy company Burisma Holdings, receiving $80,000 a month for a no-show job, despite the fact that he had zero experience in the energy sector. When Ukraine’s Prosecutor General, Viktor Shokin, launched an investigation into corruption at Burisma, Joe Biden abused his power as Vice President and coerced the government of Ukraine into firing Shokin by threatening to withhold $1 billion worth of aid if they didn’t, and later bragged about it.

Naturally, the Left has insisted that the Bidens did nothing wrong, and has instead absurdly claimed that it is the Trump family that is making money off the President’s power. Recently, President Trump’s eldest son, Donald Trump Jr., challenged Hunter Biden to a debate on the issue of nepotism and political corruption, to see which of the two men has truly profited more from their family’s respective political positions. Of course, like the upcoming showdown between their fathers, it is already a foregone conclusion who would win that debate. But for the time being, the fact the the Trump children stopped all international business as soon as their father became President, whilst the Biden clan has only increased its corrupt practices, is telling. For details of all their pay for play and crooked practices, see Peter Schweizer’s latest book: Profiles in Corruption. 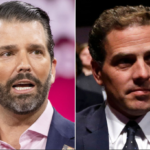