After two bills aimed at combatting the Wuhan Coronavirus passed through Congress on a bipartisan basis, the Democrats finally let their bias block on the third bill.

The bill in question would implement widely-anticipated economic relief to Americans in the form of $1,200 checks for individuals negatively impacted by the spread of the virus, in addition to relief for small businesses and aid for hospitals and other medical facilities.

But when it came time for a procedural vote to end debate and move the bill to a full vote on the floor of the Senate, a 60-vote threshold was required and all of the Democrats united against the bill, stalling further progress on relief for the time being. Then, after encouraging Chuck Schumer to stall this bill, Nancy Pelosi announced that House Democrats will write their own bill instead.

While government spending is not always the solution, it is clear that the government must provide relief to regular, hard-working, taxpaying Americans who are hit the hardest by this bill. But the Democrats have proven that they don’t really care about the working class as they say they do. At the end of the day, even with a global pandemic on our doorstep, all they can think about is harming President Trump’s re-election chances. 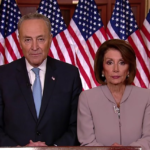