Although most model projections indicated that the Chinese Wuhan Coronavirus would peak in the United States in mid-April, the hard numbers from on the ground seem to indicate that the peak may have already passed.

As reported by Breitbart, daily hospitalizations in the state of New York – which has become the epicenter of the outbreak in the United States – have plummeted by 75% over the course of the last few days. Hospitalizations peaked last week at 1,427 on Thursday, April 2nd; on Sunday, April 5th, there were only 358 hospitalizations.

Governor Andrew Cuomo’s office has since revised its original projections to dramatically lower levels to match the latest drop-off: Now, a spokesperson for Cuomo said, New York will only require between 20,000 and 30,000 hospital beds, instead of the previous estimates of over 110,000.

These dramatic changes even forced a New York Times reporter to admit, in no uncertain terms: “It’s over, guys. It’s already over.”

If the spread of the virus has already come to an end in the hardest-hit state in the country, then it’s only a matter of time before the decline is seen all across the nation. The light at the end of the tunnel is truly in sight at last.

Add to this the possibility that many non-Coronavirus deaths are being incorrectly categorized as resulting from infection with the Wuhan virus, and we may be able to get America back to work must faster than planned. 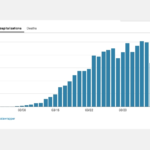