As the coronavirus hysteria continues in the media, the latest reports appear to confirm that the virus is not nearly as big of a threat as once believed.

Congress has successfully passed an $8.3 billion spending package aimed at combatting the coronavirus, strengthening federal government’s response, and aiding state and local officials in dealing with the various individual cases throughout the country. President Trump signed the package into law shortly before leaving for Tennessee to survey the damage caused by the recent tornadoes.

Secondly, HHS has confirmed that the mortality rate for the coronavirus is significantly lower than previously indicated. While the initial media hysteria incorrectly declared that the mortality rate was around 2% or 3%, the most recent estimations put it somewhere between 1% and 0.1%. This is only further confirmed by the vast number of infected individuals who have recovered from the virus due to proper medical treatment.

As time goes on, this so-called epidemic is only further exposed for what it is: a media sensation, not nearly as deserving of the hysteria and fear that it has wrought, and just another disease that can, and will, be defeated through common sense solutions and vigilance. 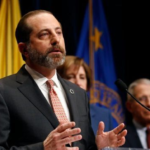