There are many significant aspects of the ongoing Chinese Coronavirus pandemic that the media is blatantly ignoring in their latest coverage.

Most who follow the mainstream media probably have no idea that the federally-mandated CDC guidelines of “social distancing” and other quarantine measures expired on April 30th, thus essentially ending the federal lockdown and leaving the future of the country in the hands of the nation’s 50 governors.

But another equally important fact that the media is seeking to bury is the stunning revelation first uncovered by the Washington Times’ Tim Young, who pointed out on Twitter that the CDC just made a heavy revision to its Coronavirus death toll, as displayed on its website. Mere days after widely-circulated media reports that the United States had just surpassed 65,000 deaths, the CDC changed its own total down to a much smaller amount of just over 37,000.

Not only does this prove that the Chinese virus is not nearly as deadly as originally believed, but it also most likely confirms that many of the deaths previously attributed to the Coronavirus were actually caused by other underlying factors, such as pre-existing conditions, or even deaths falsely attributed to the virus when said victims were not proven to have had the virus in the first place.

Above all else, this confirms once and for all that the virus’s peak is past us. The curve has long since been flattened, the worst is over, and it is time to reopen America. 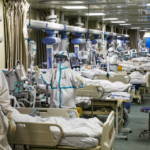