One of the bravest culture warriors on the American Right, Candace Owens, announced on Twitter yesterday that she is considering the life political.

Owens, who currently hosts a show with PragerU, said that although she “never had any desire to” run for office before, she felt that “something changed in me” the previous night, and that after discussing the matter with her husband, she is prepared to make that run if she feels it is necessary.

She is certainly no stranger to dealing with Democrats in Congress, as most famously displayed in her fiery testimony before Congress on the politically exaggerated threat of “white supremacist hate crimes,” which included a stinging takedown of Ted Lieu when he tried to play a recording of out-of-context comments by Owens.

Owens has become representative of the historic shift in the black vote towards the Republican Party and Conservatism in the age of President Donald Trump, most prominently represented by her Blexit movement that has encouraged African-American voters to finally abandon the Democratic political plantation and support MAGA instead. As such, if she were to eventually run and be elected to Congress, she could prove to be the Democrats’ worst nightmare in more ways than one.

To see the remarkable Candace in action, watch her fabulous interview with Dr. Gorka here. 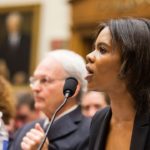