Although much of the Super Tuesday focus is on the narrowing of the Democratic field to just two candidates, there were plenty of other significant upsets that the mainstream media has swept under the rug, mostly because of the positive signs they show for Republicans.

The GOP may very well be able to take back the House of Representatives in November, if the results of the congressional primaries in California are any indication. It has been reported that nine Democratic seats in the deep-blue state could possibly flip to red in November, from multiple Orange County seats to several seats in the Central Valley. Even the seat of disgraced former Democrat congresswoman Katie Hill may be up for grabs this fall. If this turns out to be the case, then that already would make up half of the seats that Republicans need in order to retake the lower chamber.

Most of the Democrats in question were first elected in 2018, as part of the group falsely represented as “moderates” who could work with President Trump. But after all of them voted in favor of impeachment and threw away the last two years just to push the phony witch hunt, it seems that even California voters are prepared to repay the favor by throwing them out of office. That, combined with President Trump’s re-election victory, would guarantee that the MAGA agenda could be pursued again by a re-elected president and a new Republican majority in both Houses. 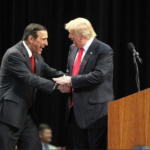