Throughout the Coronavirus outbreak, New York Governor Andrew Cuomo has taken a leading role in the Democrats’ response, right down to his own daily press briefings attempting to copy President Trump.

But recently, Cuomo’s facade of “leadership” has all but crumbled. On top of the recent revelations that Cuomo vastly overestimated the number of ventilators and hospital beds that New York would need to deal with the Coronavirus, Cuomo allowed the mask to slip in his most recent press conference.

When one local reporter, in a rare act of actual journalism, asked Cuomo about the widespread protests by Americans who want to go back to work, Cuomo responded with nothing but sarcasm and disdain. He essentially tried to argue that economic displacement, poverty, and joblessness aren’t as bad as death, and snapped that “if you want to go to work, go take the job as an essential worker.”

Cuomo’s behavior stands in stark contrast to President Trump’s, not only by showcasing the difference between a partisan politician’s approach and a true leader’s approach, but also contrasting the Republican response to the Democratic response: While one side wants to provide relief to suffering Americans and care for them in this time of need, the other side can still only treat the American people with contempt and mockery. 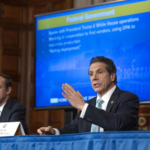