Sebastian opens the show by reacting to the one-minute viral video of a masked DHS employee repeatedly trying to block Senator Ted Cruz from filming the conditions of illegal aliens being kept in detention facilities on the southern border. As Cruz films one of the holding areas that is overflowing from its recommended capacity, the young woman keeps shouting over and over again that Senator Cruz needs to stop filming in order to “show dignity and respect” to the illegal aliens. Senator Cruz points out that the conditions in which they are being contained alone is already denying them “dignity and respect.” Furthermore, Sebastian draws parallels between her broken-record platitudes and the kind of mindless word-salad propaganda that would be heard in Communist or fascist nations in the past. 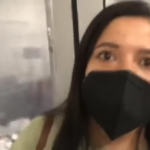