In the opening segment of the third hour, Sebastian is joined via Skype by Congressman Matt Gaetz to talk about the future of the national populist movement that President Trump started, and how it will continue carrying on his legacy after he leaves office. Congressman Gaetz also holds nothing back in describing the primary reason Kamala Harris rose so quickly through the ranks of the Democratic Party, and how it establishes her as the epitome of elitism. 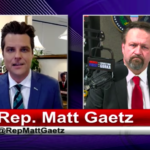 America First Highlight: You don’t have to whore yourself