In this two-part interview, Sebastian is joined by American Greatness columnist and Hoover Institution fellow Victor Davis Hanson, to talk about the latest on the widespread unrest and domestic terrorism in America. After addressing the fake news story from the New York Times about alleged Russian “bounties” on American troops, Professor Hanson talks about how the entirety of the 2020 election hinges on how President Trump handles the riots and looting. Professor Hanson asserts that while there are some things that the President might not be able to do regarding the military, he can and still should do what he can to enforce law and order, so as to satisfy the millions of angry voters who want to see the riots quelled. 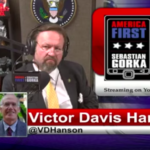