For the opening segment of the show, Sebastian talks to investigative journalist John Solomon about his latest explosive report at Just The News. John explains how he uncovered evidence of a major Democratic donor funneling foreign money to major Democratic politicians, including Barack Obama and Hillary Clinton, which not only proves how corrupt the party is, but also shows that they are the side that is truly most guilty of foreign collusion, not Donald Trump. 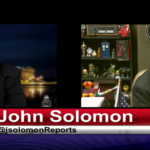 America First Highlight: Why was an intel asset funding Democrats?