For the opening monologue, after watching some archived AP footage of the first atomic bomb being dropped on Hiroshima, Sebastian reflects on the 75th anniversary of the event that ultimately ended World War II. After noting that this was ultimately the right decision to make in order to avoid the needless destruction of thousands of more lives, Sebastian compares that great war to the current war we are facing in America today; although they are two very different conflicts, both represent an existential threat to America, in their own separate ways. And, just like with World War II, we must win this war at all costs. 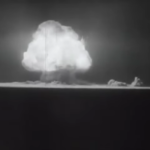 America First Highlight: Why today’s anniversary matters more than ever