Reacting to the tragic news that the great Herman Cain has passed away at the age of 74, Sebastian is joined by Salem Radio’s Tom Tradup to pay tribute to Mr. Cain. Reflecting on his political contributions, from his own presidential run in 2012 to his support for President Trump, Tom also discusses Herman’s time spent in the radio industry, and how that was just one of the many industries he was proficient in, as a testament to his many talents. This was one of the many reasons why the Left hated Herman so much and constantly tried (and failed) to tear him down. 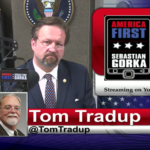 America First Highlight: Why they hated the great Herman Cain