Sebastian opens the show with his Salem Radio colleague and the founder of PragerU, Dennis Prager, to talk about an extremely important article that Dennis has recently written for American Greatness. In the article, Dennis breaks down the truth behind the Left’s rabid hatred of white people in the United States: They hate the values upon which this nation, and indeed, all of Western Civilization, was built, and the fact that it was predominantly white people who built it. Those who hate white people and hate America, Dennis explains, have the same motivations as anti-Semites who hate the Jewish people and the state of Israel; because both nations are symbols of democracy and built upon foundations of a strong faith in God. 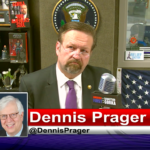