In this week’s interview with Professor Victor Davis Hanson, Sebastian and Professor Hanson discuss why President Trump’s polling numbers have rebounded so sharply in the last few weeks against Democratic nominee Joe Biden. In addition to the ever-shifting Democratic Party lurching further to the Left, as well as Biden’s disastrous pick of Kamala Harris as his running mate, Professor Hanson compares the Left’s endless assault against President Trump to the resilience of William Wallace in the movie “Braveheart,” and how the relentless tide of negativity will eventually turn more people in favor of President Trump. 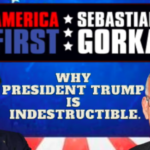