For the opening monologue of the show, after recapping his time at Turning Point USA’s Student Action Summit (SAS) in Florida, Sebastian turns to a very heavy subject: The devastating state of the black community in America today. He cites, as two of just the most recent examples, the shootings of 56 people in Chicago over the weekend, with 11 killed, as well as a shooting outside the Nationals Baseball stadium in Washington D.C., apparently the result of gang violence. Over the same weekend, also in Washington, a 6-year-old girl named Nyiah Courtney was killed in the crossfire of gang violence. Sebastian discusses the many conditions – most of which were implemented by the Democrats – that have led to this tragic decline in the African-American community, from the rampant welfare state to poor education quality, which has forced many young black men into a life of crime. 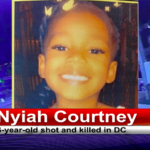 America First Highlight: Why Nyiah Courtney had to die.