Sebastian opens the show by discussing the true danger of the far-left ideology of “transgenderism,” which seeks to destroy all biological, historical, and scientific notions of gender by claiming that there are more than two genders, and that children can “change” their gender at any time. This propaganda is being promoted in schools, along with other more graphic sexual education that openly encourages sexual activity amongst little children, and constitutes child abuse. This also risks permanently damaging the mental state of children who are convinced to “transition,” as there are fundamental differences not only in the physical bodies of boys and girls, but in their mindsets and social behavior, that cannot be replicated by “gender transition surgery.” Proving just how far this ideology is going, Sebastian plays a clip of a Loudoun County teacher who openly speaks out against his own school board, saying that his religious beliefs have prevented him from teaching these subjects because he knows it is wrong. In order to protect our children from this harmful indoctrination, we must all stand up like this brave teacher did. 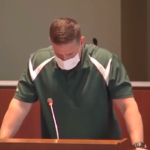