For the entirety of the third hour, Sebastian is joined via Skype by his Salem Radio colleague Larry Elder, who is now running for Governor of California in the 2021 recall election. Larry talks about his early life, including his strained relationship with his father and how they eventually reconciled. Larry then turns the focus to his gubernatorial campaign, which started off with incumbent Governor Gavin Newsom actively trying to keep him off the ballot by claiming he didn’t properly file his tax returns, only for Larry to win in court and earn his spot on the ballot. Larry discusses the major issues of his campaign, including crime, homelessness, and the unbearable costs of living in California, how Democratic policies are responsible for these disasters, and how he will fix them as Governor Elder. 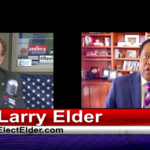