For the opening monologue, Sebastian reflects on the upcoming 20th anniversary of the September 11th attacks by looking back at the history leading up to the terrorist attacks. After reviewing other great global conflicts throughout modern history, from the World Wars and the Cold War up to the War on Terror, Sebastian reminds the audience that radical Islamists have always hated the United States and our very way of life, and for that reason alone were determined to attack us at some point or another. With this in mind, the threat of a new terror attack is greater than ever now that the Taliban is in complete control of Afghanistan once again, now with leftover American weapons and equipment, and much better funding than before. 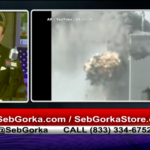