Sebastian opens the show with a fiery monologue on the media’s blatant double-standards with regards to its portrayals of the Atlanta shooting vs. the Boulder shooting. While they were quick to pounce on the Atlanta shooting due to its perpetrator being a white man, they have balked at publicizing the identity of the Boulder shooter after his name was revealed to be Ahmad Al Aliwi Alissa. The fact that this shooting was carried out by a Syrian from an Islamic family is also further proof that the new Biden Administration is not prepared to handle the threat of Islamic terrorism, which was all but crushed under the Trump Administration. 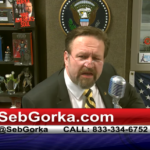 America First Highlight: Who really is the Colorado shooter?