For the second monologue of the show, Sebastian addresses the ongoing argument between Republican National Committee (RNC) Chairwoman Ronna Romney McDaniel, and President Donald Trump’s former attorney Jenna Ellis. Jenna had recently revealed that after a top RNC lawyer named Justin Riemer referred to her and Rudy Giuliani’s efforts to fight voter fraud as “a joke,” and also declared his hope that President Trump would lose in 2020 so the RNC could raise more money as the opposition party once again, Romney McDaniel promised Jenna, Rudy, and President Trump himself that Riemer would be fired. But Riemer was never fired and remains with the RNC to this day. On top of that, Romney McDaniel and the rest of the RNC, despite privately dismissing voter fraud as a “conspiracy theory,” nevertheless fundraised over $200 million from Trump voters by vowing to fight voter fraud; that money was never seen by Jenna, Rudy, or the rest of President Trump’s legal team. 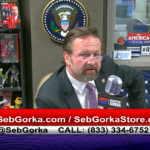