For the latest update on the border crisis, Sebastian talks to Todd Bensman of the Center for Immigration Studies, who recently filmed a stunning video of the latest surge. In the city of Del Rio, Texas, well over 15,000 illegal aliens are staying underneath a massive bridge as they wait for federal authorities to take them into custody, knowing that they will most likely be released out into the country afterwards. Todd reveals that not only are the conditions of this makeshift camp absolute squalor and completely in defiance of most safety and health guidances in the midst of COVID, but that a significant number of illegals are not even from the nearest Latin American countries; instead, there are immigrants from the island nation of Haiti, and even nations as far away as Angola, which suggests a frightening trend of hundreds of thousands of illegals pouring into the country from all around the world. 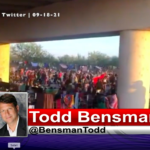 America First Highlight: Where the Haitian illegals are really coming from.