Sebastian opens the third hour with Congresswoman Lauren Boebert, who is calling in from the United States-Mexico border with Freedom Caucus Chairman Andy Biggs of Arizona. After talking about the importance of border security, Congresswoman Boebert denounces the Democrats’ violent rhetoric against Republican members of Congress, including House Speaker Nancy Pelosi’s absurd and baseless claim that Republicans are “the enemy within.” Congresswoman Boebert also points out the sheer hypocrisy of Democrats who support open borders, yet demanded the installation of a security fence around the United States Capitol following the January 6th protests. 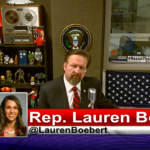