Sebastian opens the show on this sad day by announcing the passing of the talk radio giant Rush Limbaugh, at the age of 70, after a battle with lung cancer. To pay tribute to Rush, Sebastian talks to the Vice President of the Salem Radio Network, Phil Boyce, who talks about the first time he ever heard Rush Limbaugh, back before Rush became the iconic figure he is today, and who would eventually dominate the airwaves for decades. 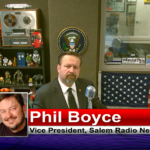