Sebastian opens the show by reacting to clips of Congressman Matt Gaetz’s interview with Tucker Carlson in response to the sudden allegations of him having an affair with a 17-year-old girl. After Congressman Gaetz reveals that he and his father went to the FBI to report the allegations as an extortion attempt by former DOJ official David McGee, Sebastian turns to the rest of the AMERICA First team – Geoff, Shad, and Eric – to debate the implications of the allegations, Gaetz’s counter-allegations, and the future of Congressman Gaetz’s political career. 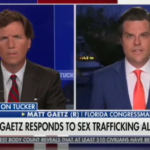