Sebastian opens the show by reacting to the news that Sidney Powell has been fired from President Donald Trump’s legal team, and analyzes what exactly the move means for the future of President Trump’s legal strategy going forward. Sebastian notes that the accusations Sidney has been making are massive, and if true, would constitute the single biggest crime in American history; as such, some evidence must be provided in order to back up these claims, or else such claims risk making our side and our efforts to save the 2020 election look bad. 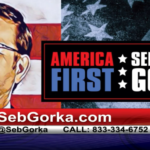