Sebastian opens the show by ripping into the Lincoln Project, which has been roiled by a sex scandal involving one of their co-founders, John Weaver. It has been revealed that Weaver sent sexually explicit messages to at least 21 young men, one of whom was just 14 years old. After excoriating Weaver as a Swamp-dweller and pedophile, Sebastian lambasts his fellow NeverTrumpers who, despite their pleas of ignorance, were most likely complicit in his crimes. 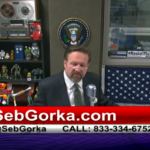 America First Highlight: What did Lincoln Project know, and when did they know it?