Congresswoman Lauren Boebert of Colorado’s 3rd district returns to AMERICA First to talk about how President Trump is still more popular than ever within the Republican Party. Despite the leadership’s frequent clashes with President Trump in the past, and even despite his impending departure from the White House, Congresswoman Boebert says that the party has shifted significantly during his four years, and will never return to the old guard of Bush-era “conservatives” who were in charge before.
Watch Sebastian’s full interview with Congresswoman Lauren Boebert here.
AMERICA First is the newest nationally-syndicated radio show in the United States, part of the Salem Radio Network. The host, Sebastian Gorka PhD., served most recently as Deputy Assistant for Strategy to the  President of the United States, Donald J. Trump, and is author of the New York Times bestselling book “Defeating Jihad.” His latest book is “The War for America’s Soul.” You can follow him on Twitter @SebGorka, on Facebook, and on Instagram @sebastian_gorka. AMERICA First is available on the iTunes podcast app, streams live at www.sebgorka.com, and is on YouTube. You can contact him here. 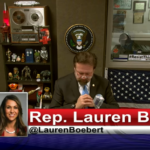