Sebastian is joined via Skype by Arizona gubernatorial candidate and former television anchor Kari Lake to talk about her candidacy. Kari reflects on her recent meeting with President Donald Trump, and how he truly has changed the Republican Party forever, and for the better. Comparing and contrasting Kari’s willingness to come on AMERICA First vs. Virginia gubernatorial nominee Glenn Youngkin’s refusal to appear, Sebastian and Kari reflect on how the era of spineless RINOs is over, and the new era of MAGA candidates is here. Kari also reaffirms her support for the ongoing audit of the 2020 election results in Maricopa County, and says that as Governor, she would support a de-certification of Arizona’s electoral results if the audit reveals that there was substantial voter fraud in the state last year. 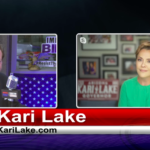 America First Highlight: We’re in the era of the Trump Republican