In his first-ever appearance on AMERICA First, NASA’s Deputy Administrator Jim Morhard talks about the latest ambitious goals of the iconic American space program. After reflecting on how far we have come from John F. Kennedy’s promise to go to the moon, and how NASA was downgraded and politicized under the Obama Administration, Deputy Administrator Morhard explains how President Trump has revived the space program and elevated it to a point that has made the idea of landing on Mars a real possibility for the first time ever. 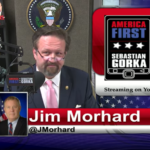