For the opening two segments of the show, Sebastian reacts to the firebrand press conference by President Donald Trump’s all-star legal team, and particularly the blistering condemnation of the Fake News media by attorney Jenna Ellis. Jenna, who then joins Sebastian in-studio, further explains how the media so dishonestly misrepresents the current state of the fight over the 2020 election, as well as how the President’s team has gathered overwhelming evidence of systematic, widespread, and coordinated voter fraud that ultimately changed the results of the election, proving that Joe Biden’s “victory” is false. 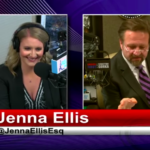