For the third hour’s monologue, Sebastian first reacts to a heartwarming clip of former Olympian and boxer George Foreman, in an interview on Fox News, talking about how he, as a black man, will never turn his back on the American Flag and what it stands for, since America allowed him to become the success that he is today. Sebastian then pivots to a much more disturbing subject: A viral animated video that has been circulating on the Internet featuring young boys singing and dancing to a song encouraging boys to reject “toxic masculinity” and embrace feminism and “feminine” qualities. Sebastian utterly demolishes the core argument of the video, pointing out that “toxic” masculinity is good, because it is a man’s role in society to be strong and to fight when necessary. It is “toxic” men who make for history’s greatest heroes, including our Founding Fathers, and that alone is why the notion that men are the stronger of the two genders should never be abandoned. 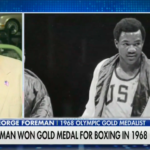