In this two-part interview, Sebastian talks to former CIA and NYPD official Buck Sexton about the existential threat that is currently facing the American Right in the wake of the Antifa and Black Lives Matter riots all across the country. Buck points out that, where the Left has mastered the ability to organize, unify, and build massive eco-systems and political infrastructures necessary to win the culture war, the Right has failed miserably to replicate this effort. Buck also laments that some conservatives are far more concerned with sniping at their own side in order to virtue-signal to the Left, rather than fight for the team. 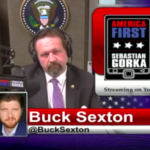