In her first-ever appearance on AMERICA First, former Fox News host Megyn Kelly, host of The Megyn Kelly Show podcast, joins Sebastian to react to Joe Biden’s inauguration. After reflecting on a four-year-old clip from when Sebastian was interviewed by Megyn on Fox as a member of the Trump Administration, Sebastian and Megyn talk about the Left’s increasingly racist rhetoric against White Americans, including suggestions that White members of the National Guard are compromised simply because of their skin color. 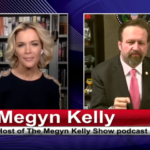 America First Highlight: We have to fight the Left’s racism.