For the opening monologue, Sebastian gives his further thoughts on the return of Andrew Cuomo’s sexual assault scandal. He reacts to a surprising stance taken by his Newsmax colleague Greg Kelly, in which Greg actually defends Cuomo as being “railroaded” by a “witch hunt.” Sebastian draws the opinions from the rest of the America First team, with engineer “Professor” Shad suggesting that the benefit of the doubt should always be given, but perhaps Cuomo has overstepped those boundaries; producer Eric thinks Cuomo deserves to be taken down by the very mob that the Left created, while producer “Mr. G” Geoff thinks that the startlingly bipartisan consensus in calling for Cuomo’s resignation is suspicious enough to be skeptical. 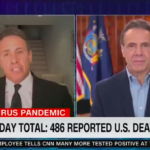