Sebastian is joined by Nick Searcy to have a friendly debate on the spat between Fox News’ Tucker Carlson, and one of President Trump’s all-star lawyers Sidney Powell, over the merits of releasing or withholding the Trump team’s evidence of widespread voter fraud in 2020. While Sebastian gives the benefit of the doubt to Tucker, who claims that Sidney refused to provide him with any evidence to display on his highly-rated show, Nick takes Sidney’s side and argues that it is not the place of cable news programs to showcase evidence in such a massive legal case as this. 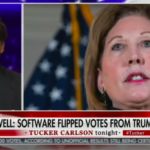